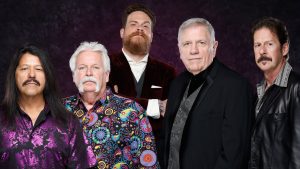 The Seger System band members are all long time and seasoned musicians with many decades of professional experience on the road and in the recording studio.

With his powerful, gritty and soulful voice, Josh Jaccard transforms into the Rock and Roll Hall of Famer, Bob Seger and replicates the vocals of the legendary rocker.
Born in 1984 into a musical family in Dallas, Texas, Josh has developed into a natural entertainer with wide vocal range and dynamic stage presence. A professional musician since 18, he has made his way through many different genres of music. Josh has fronted many Classic Rock cover bands and he has starred as Joe Cocker in a Dallas tribute band.
Josh is an accomplished solo musician in his own right as well as a multi instrumentalist; playing guitar, harmonica and percussions.

Albert Martinez is a native of Ennis, Texas. He inherited his musical “blood” from his father, an accordion player, and his mother’s dad, a violinist and banjo player. He played with several bands in high school, and after graduating, formed the country band, “Buckshot”. The band played in the D/FW area and even opened for several artists such as Boxcar Willie, Claude Grey, and Johnnie Duncan. In the late 80’s, as a talented drummer, Albert recorded an album produced by John Nitzinger, with the rock band “Sudden Pressure”. In 1992, a reorganization brought about the blues/rock band, “The Cadillax”. In 2005, Albert formed the 80’s rock cover band, The Pontiax. The band still performs today all over the north Texas region.

Originally from El Paso, Texas Michael Self started out playing in clubs while still in high school, Mike learned the gritty side of the business early. He moved to Dallas in the 1980’s to pursue playing music professionally. Some of his credits from this time include playing and recording an album with the pop/rock band, “ReAckShun” in 1984. In 1987, he hooked up with the band “Inasense” in which he toured the western U.S. and Canada. He played in the country band “Perfect Stranger” starting in 1989 and toured Canada again in 1990. In the mid 90’s he worked with the band, “Loaded Guns” in which he recorded an album that received regional acclaim. Mike is a talented vocalist and he is a multi-instrument musician. Along with being the guitarist for the Seger System band, he performs with The Pontiax and the tribute band Dunn & Brooks.

A native of Tyler, Texas, Dr. Jim Rodgers has traveled throughout country playing music. He was the lead singer in his first band at age 16. In college, Jim joined a singing group that performed at many events including a performance during half-time at Super Bowl XII! It was in college when Jim decided to pursue the piano. In just two years, he was playing piano bars and paying for college. He played with a couple of bands and then started his own group called “Nightmoves”. He later joined “Perfect Stranger” in 1987. Jim toured with “Singletree” as well as recording and playing with “Loaded Guns” in the mid 90’s. By the mid 2000’s, Jim joined The Pontiax as a vocalist and their keyboardist.

David Dowd switched to bass guitar at age 12 after his Saturday mornings guitar instructor allowed him to play a new Baldwin electric bass. He learned how to play by picking out bass parts from his favorite 60s and 70s bands. David performed with numerous musicians and bands through junior high, high school and college years. Though David has had a four decade aviation career , he found time to play in several bands including the country/rock hybrid band, Buckshot with long time friend, drummer Albert Martinez. In addition, David has played with The Pontiax and The Groove Tones. Most recently, he played with Ellis County local bands Smoke ‘n Mirrors Rock Band and The Java Llamas. David’s talents will help create the soulful sounds of Bob Seger music.